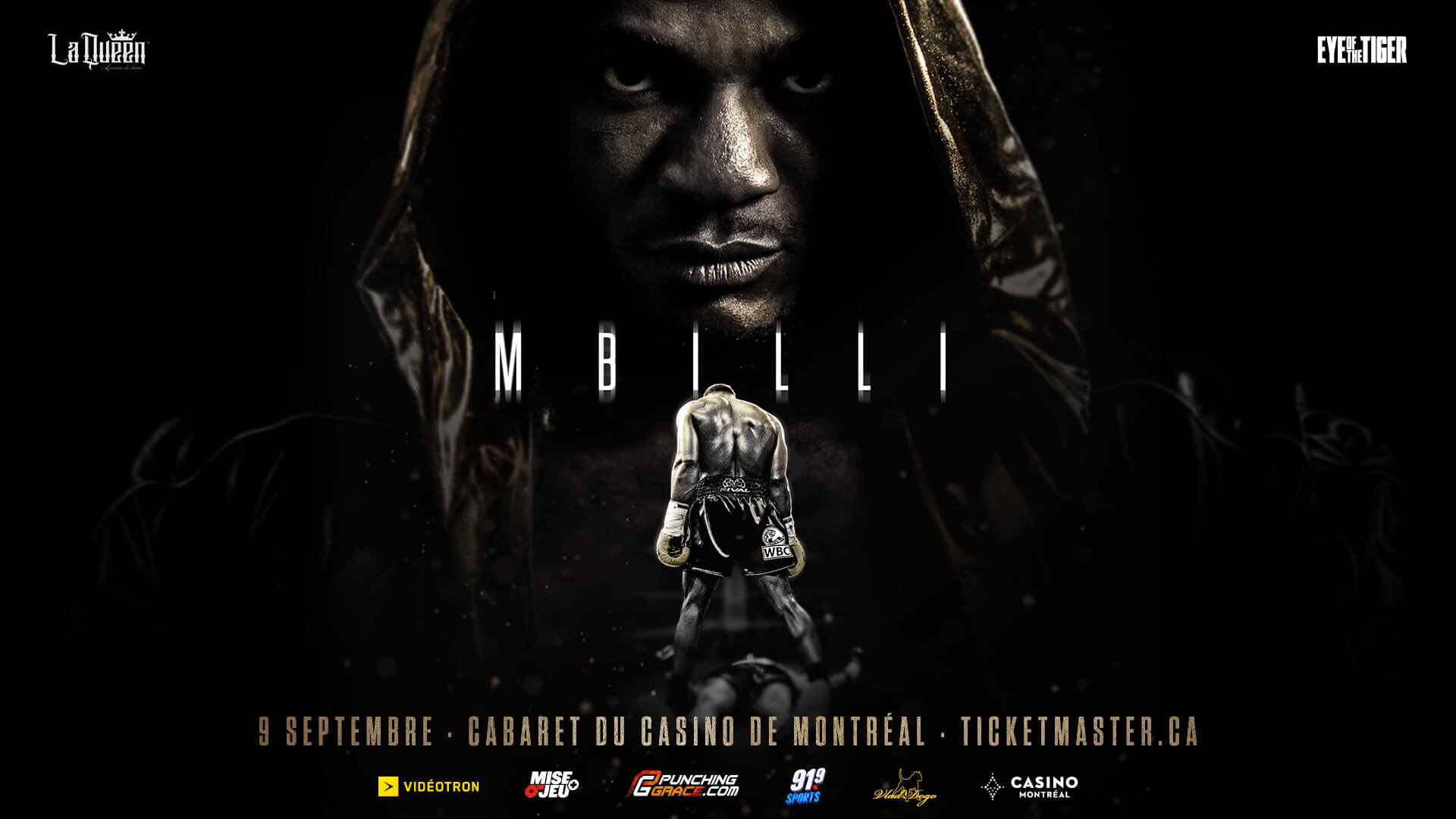 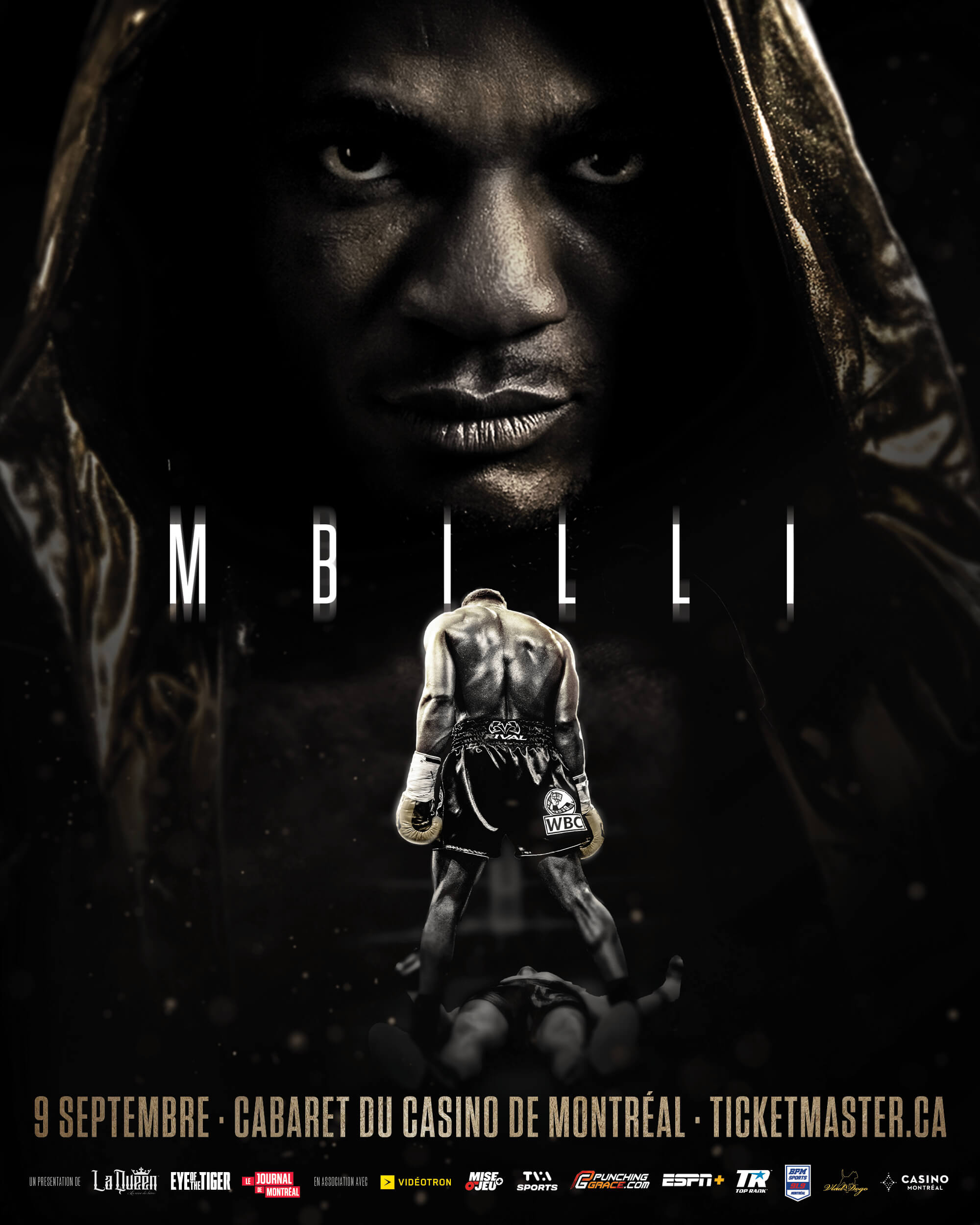 Christian “Solid” Mbilli (21-0, 19 KOs) is out to dominate the 168 lb. weight category and plans on making a statement on September 9 as he fights his way to the top to claim a second title belt. The Eye of the Tiger protegé will face off against American DeAndre Ware (15-3-2, 9 KOs) for the WBC Continental of the Americas belt as well as the WBA super-middleweight belt, crowning the event at the Cabaret du Casino de Montréal, simulcast on the Punching Grace network beginning 7:00 pm.

5th in the prestigious Ring Magazine ranking and 3rd according in the WBC ranking, Christian Mbilli is enjoying a meteoric and well-deserved rise to the top of the rankings. Last March, Mbilli gave an explosive performance by knocking out Nadjib Mohammedi in the 5th round. This spectacular win laid the groundwork for his defense of the WBC Continental of the Americas title a second time, following his victory by unanimous decision against seasoned American Ronald Ellis. This last clash was Mbilli’s greatest career challenge, and he passed with flying colors, dominating every single round.

“My strategy is to position myself as the one to beat, the ultimate challenger, in the 168-lb category, and I’m putting in the time at the gym to make sure I’m ready. I don’t care who’s standing in front of me in the ring; I’m giving it my all in my quest for victory, and DeAndre Ware won’t stop me. I’m headed for my glory days and I plan to keep moving forward”, asserts Christian Mbilli.

Although he’s largely flying under the super-middleweight radar right now, DeAndre Ware boasts a well-rounded record that clearly reveals a versatile and strategic boxer who will prove to be a formidable opponent for Mbilli, who, notably, enjoyed a definitive win against Ronald Ellis by majority decision, allowing him to lay claim to the WBC Continental of the Americas and NABA-USA titles.

“We expect Christian to showcase his ability to adapt to any situation but stay focussed on the game plan. Ware is a boxer who can force Mbilli to adapt. He proved to be a formidable opponent against Ellis; he’s skillful and fast, and he’s exactly what we’re looking for to challenge Christian on his way to an eventual world championship,” notes Christian Mbilli’s trainer, Marc Ramsay.

The event’s semi-final will feature Simon Kean (21-1, 20 KOs) in his comeback against Shawndell Terence Winters, whom he knocked out in February in the 9th round. To her fans’ delight, Mary Spencer (6-0, 4 KOs) also leaps back into the ring after delivering an unforgettable performance on June 23 by knocking ex-world-champion Chris Namus to the ground three times in quick succession in the first round of a fight that was stopped by the referee. Luis Santana (6-0, 2 KOs), Leïla Beaudoin (6-0, 1 KO), Avery Martin-Duval (7-0-1, 4 KOs) and Christopher Guerrero (3-0) will also take part in the event.

In the next few days, Eye of the Tiger will reveal the complete undercard of the Mbilli vs. Ware event that will take place on September 9 at the Cabaret du Casino de Montréal. Tickets are on sale as of Friday, July 22 at 8:00 am on Ticketmaster at www.ticketmaster.ca. To access the latest from Eye of the Tiger, follow us on Facebook or on Instagram @eottmboxing as well as on Twitter @eottmboxing. 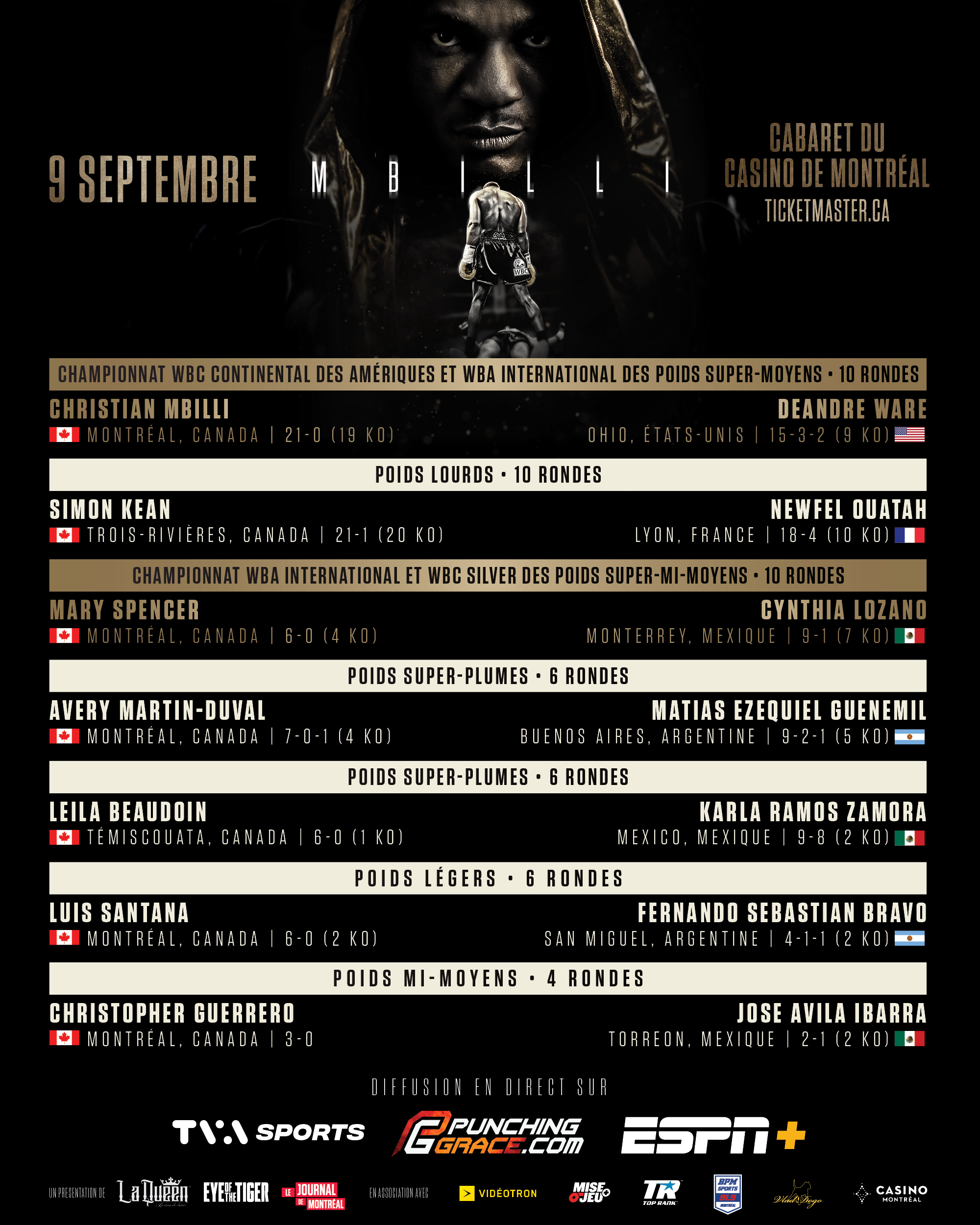