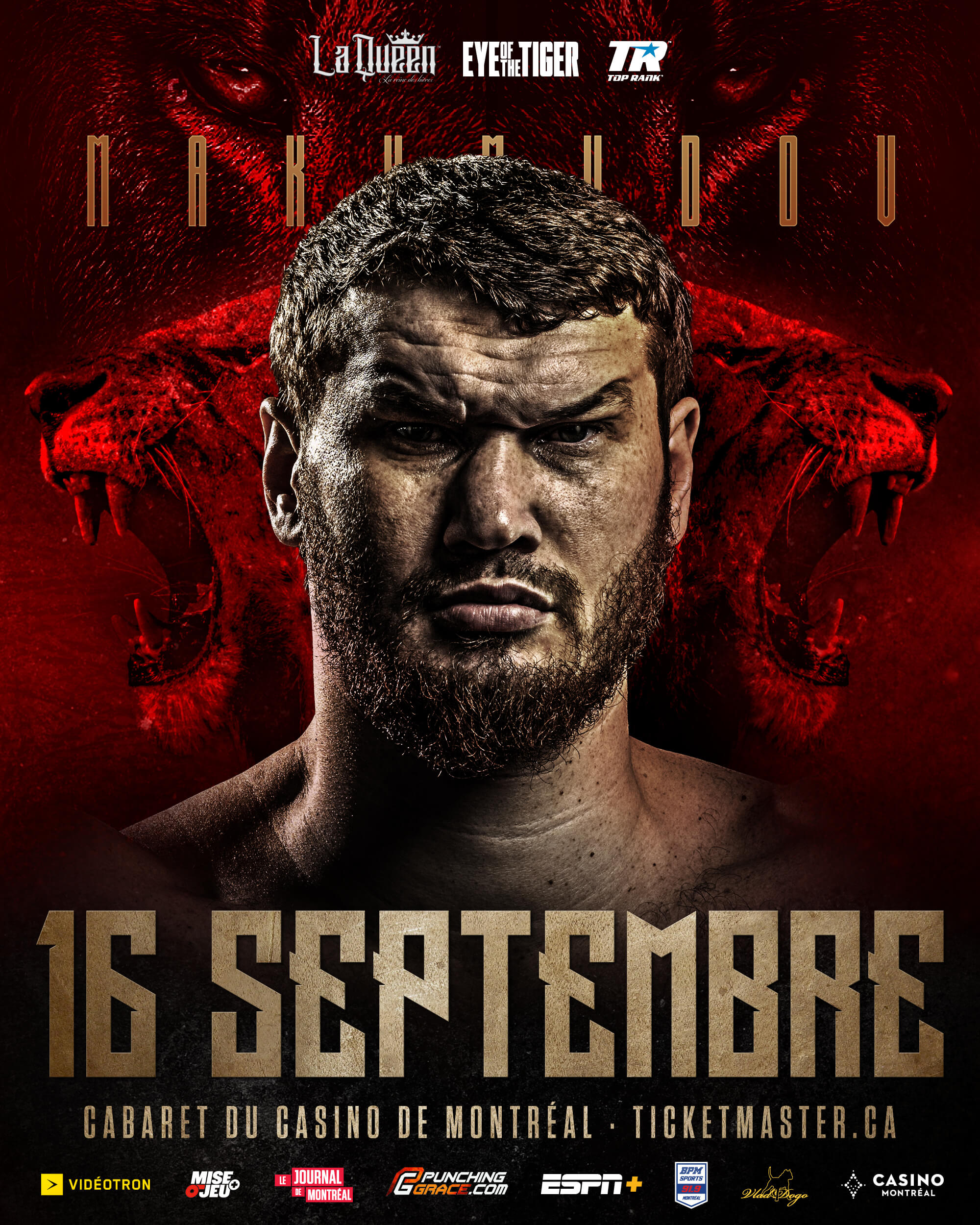 Montreal’s Eye of the Tiger delivers another one-two punch at its September 16 event, when heavyweight Arslanbek Makhmudov (14-0, 14 KOs) defends his NABF title against veteran Carlos Takam (39-6-1, 28 KOs). The NABF middleweight title will also be on the line when Steven Butler (30-3-1, 25 KOs) confronts American Mark DeLuca (28-3, 16 KOs) in the event semi-final at the Cabaret du Casino de Montréal, simulcast on the Punching Grace Network starting at 7:00 pm.

Currently ranked 7th in the WBC classification and 6th in the WBA, Arslanbek Makhmudov has continued to scale the ranks of the heavyweight division with stellar back-to-back performances. While his last victorious duel against 6’7’’ Mariusz Wach of Poland, whom he stopped in the 6th round, allowed him to maintain his imposing KO ratio, it also made it that much harder to find his opponents.

“Finding an athlete who’ll step into the ring with Makhmudov and compel him to improve is almost impossible. While we’re proud to present this duel of international caliber to our fans, we are sitting on the edge of our seats as to its outcome. Carlos Takam is an experienced, seasoned boxer who packs a punch powerful enough to give Mahkmudov a run for his money. September 16 will be a crucial step in Mahkmudov’s evolution. We invite all boxing fans to be with us for the event”, states Antonin Décarie, general manager at EOTTM.

Carlos Takam has fought 245 rounds in 46 bouts and maintained a KO ratio of 60%. The Camerounian athlete has faced off against some of the division’s biggest names: he’s gone the distance with New Zealand heavy-hitter Joseph Parker, challenged Anthony Joshua for the IBF, IBO, and WBA titles, gone toe-to-toe with Derek Chisora and defeated Jerry Forrest. These fights have allowed him to acquire valuable international experience and show him to be a fighter who gives as good as he gets. The “Lion” will certainly face a formidable opponent on September 16.

Steven Butler has shown steady progress and demonstrated remarkable maturity on June 23 as he battled Brandon Brewer and ultimately won the NABF middleweight belt. The Montreal slugger, in peak physical condition, adroitly channeled his energy to deliver a constant volley of blows throughout 10 electrifying rounds, in front of thrilled fans who looked on with bated breath.

Mark DeLuca, just as tough, opportunistic, and hardy as Brewer, presents quite a challenge to the EOTTM protegé, who will have to think on his feet to impose his own rhythm on his opponent. Well aware of the danger that Butler poses with his explosive style and punching power, the Massachusetts southpaw claims to have faith in his skill and be ready to capture the NABF title.

In addition to the two main bouts, the event will showcase Thomas Chabot (6-0, 6 KOs), who steps back into the ring for the first time since February in a quest for his 7th victory in as many fights.  In addition, this will be the 5th fight for both Buckingham boxer Alexandre Gaumont (4-0, 2 KOs) and Hamza Khabbaz (4-0, 1 KOs). Jean Gardy François (2-0, 2 KOs) will try for a KO hat trick, while Martine Vallières-Bisson (5-1, 1 KO) will return to the ring for the first time since her defeat at the hands of Laura Grzyb of Poland.

Tickets for the September 16 event featuring Makhmudov vs. Takam and Butler vs. DeLuca go on sale at www.ticketmaster.ca as of this Sunday, August 7. For more information, please go to the EOTTM Facebook page, Instagram @eottm_boxing, and Twitter @eottm11, or subscribe to the #EOTTMARMY. 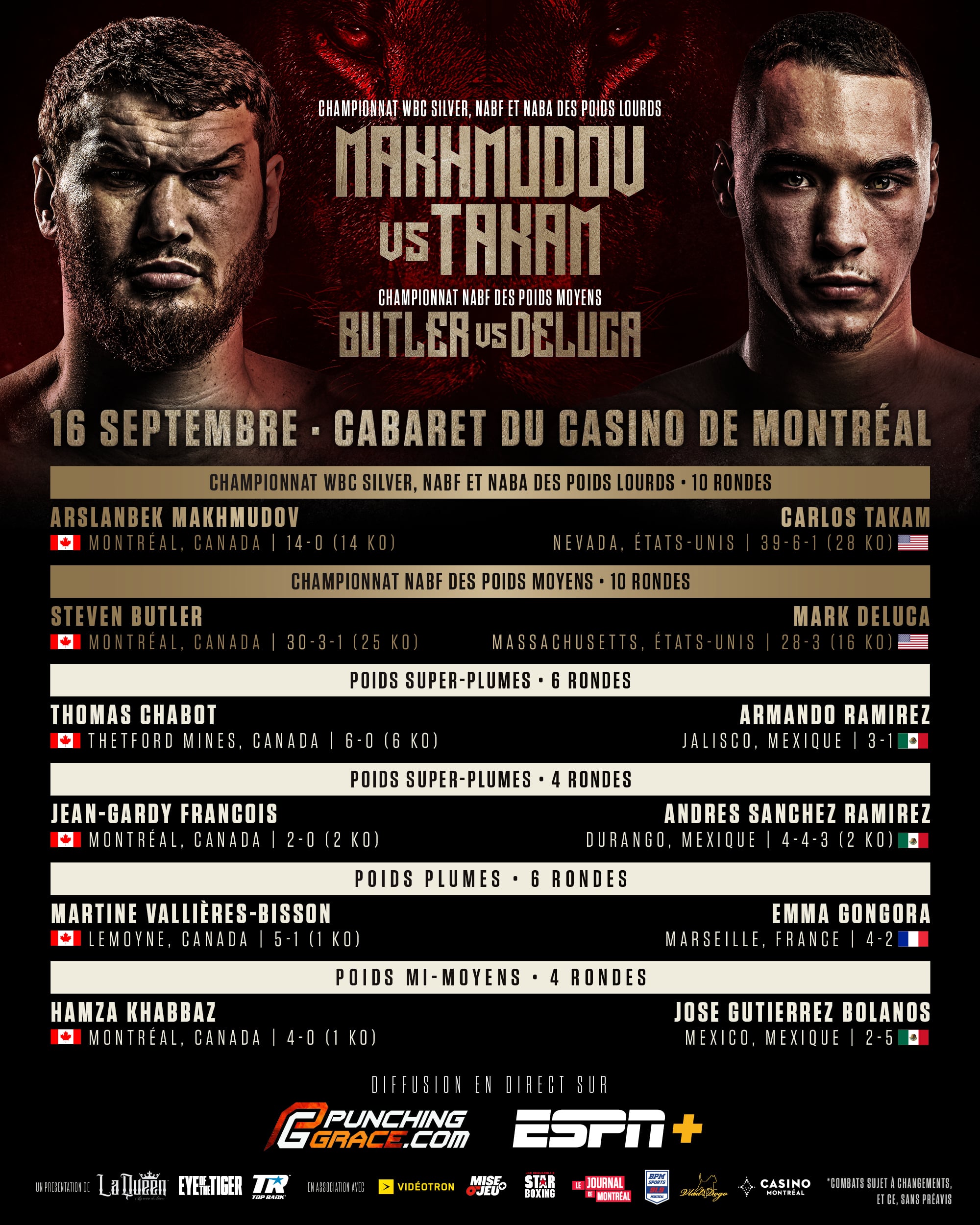