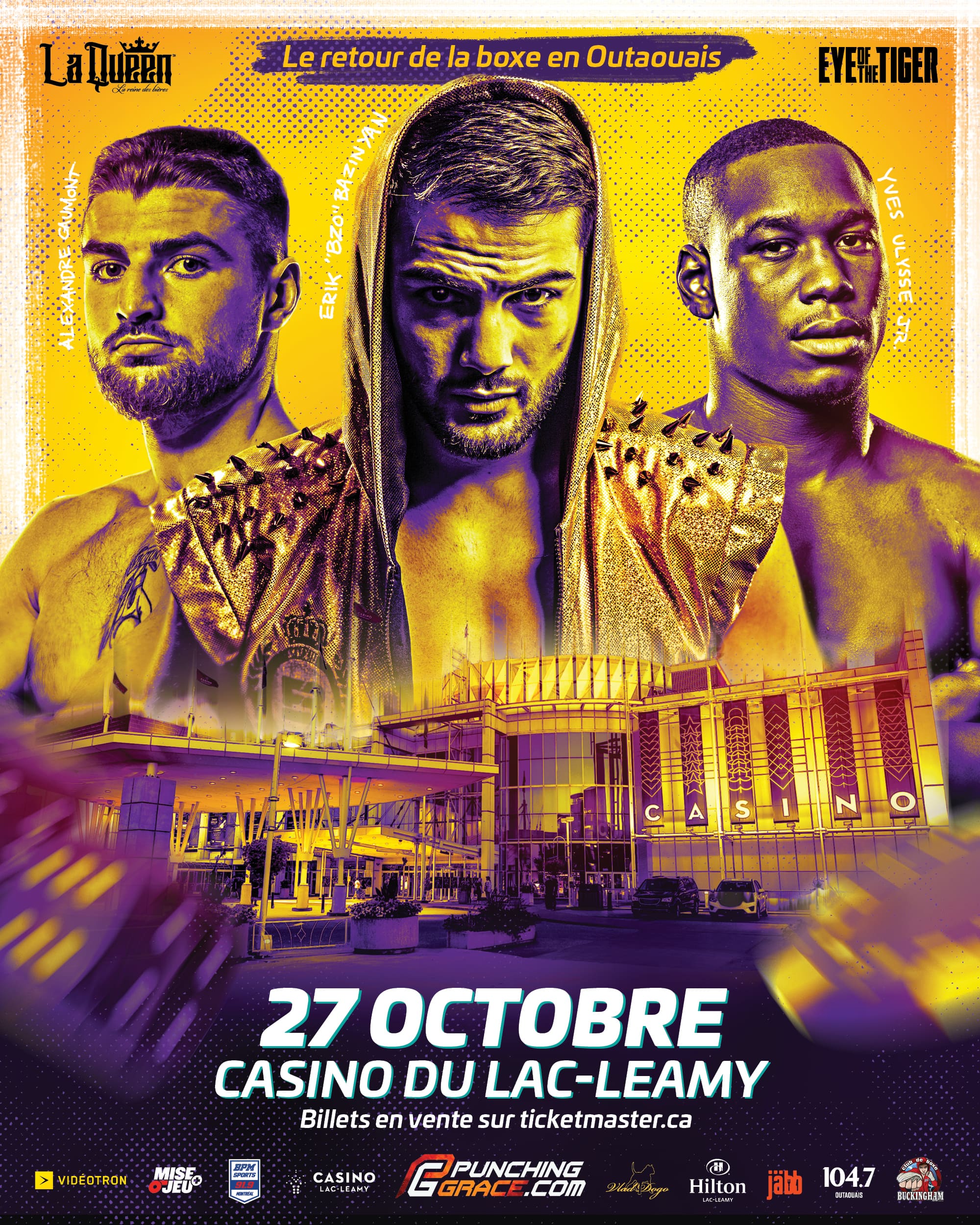 Boxers Alexandre Gaumont (4-0, 2 KOs) and Harley-David O’Reilly (in his pro debut) will have the opportunity to shine on home turf when Eye of the Tiger makes a triumphant comeback to Gatineau on Thursday, October 27 at the spectacular Théâtre du Casino Lac-Leamy. Erik Bazinyan (28-0, 21 KOs), Yves Ulysse Jr. (21-2, 12 KOs) and Steve Claggett (32-7-2, 22 KOs) will also spring into action in this action-packed evening that is sure to dazzle Outaouais boxing fans.

After presenting five galas in the Outaouais region, EOTTM now enjoys great connections in the area and hopes to contribute to the city’s influence by offering major events on a yearly basis. They are thrilled to present their latest event, in conjunction with Loto-Québec, at the Casino Lac-Leamy, which, over the years, has become a longstanding partner.

“Our events have enjoyed resounding success outside of urban centers, and the support we’ve had from people here, city administrators, and local businesses indicate that the time is right to hold galas all over Québec,” says EOTTM president Antonin Décarie. “Because Loto-Québec has been instrumental in promoting boxing in Québec and has contributed to the development of our boxers over the years, we absolutely insisted on developing this project with them,” he adds.

“Loto-Québec is a longstanding partner of Eye of the Tiger, and we are thrilled to announce the October 27 gala at the Théâtre du Casino du Lac-Leamy. We’re sure it will delight Outaouais boxing fans, and we hope this will be the first of many events at our venue,” indicates Patrick Lamy, general manager of the Casino Lac-Leamy.

Proudly representing their hometowns of Buckingham and Gatineau, Alexandre Gaumont and Harley-David O’Reilly are elated at the idea of fighting on home turf, and they hope that local boxing fans will show up in droves to cheer them on. “I’m very proud to contribute to the return of boxing in my region. When I was younger, I’d attend every single local pro boxing event. Now it’s my turn and I’ll do everything I can to bring the crowd to its feet. I’m more motivated than ever, and on October 27, I’ll give it my all in the ring to give you all an unforgettable performance,” claims Gaumont.

O’Reilly, for his part, says, “I’ve always dreamed of being a pro boxer and I’ve paid my dues at the amateur level, so when I heard that there was an event planned in Gatineau, I knew that it was now or never and I had to seize the day! Reaching this milestone before a hometown crowd is really special for me. This will be an experience that I’ll cherish all my life,” adds O’Reilly.

The evening’s event will consist of 7 fights presented by EOTTM on October 27, and Avery Martin-Duval (7-0-1, 4 KO), as well as Leïla Beaudoin (6-0, 1 KOs), will also be taking part in the heart-pounding action. Tickets go on sale today as of 12:00 pm on Ticketmaster at www.ticketmaster.ca. For further information, please follow Eye of the Tiger on Facebook and Instagram @eottm_boxing as well as on Twitter @eottm11, or subscribe to the newsletter by filling out the online form.