David Lemieux Hangs Up The Gloves 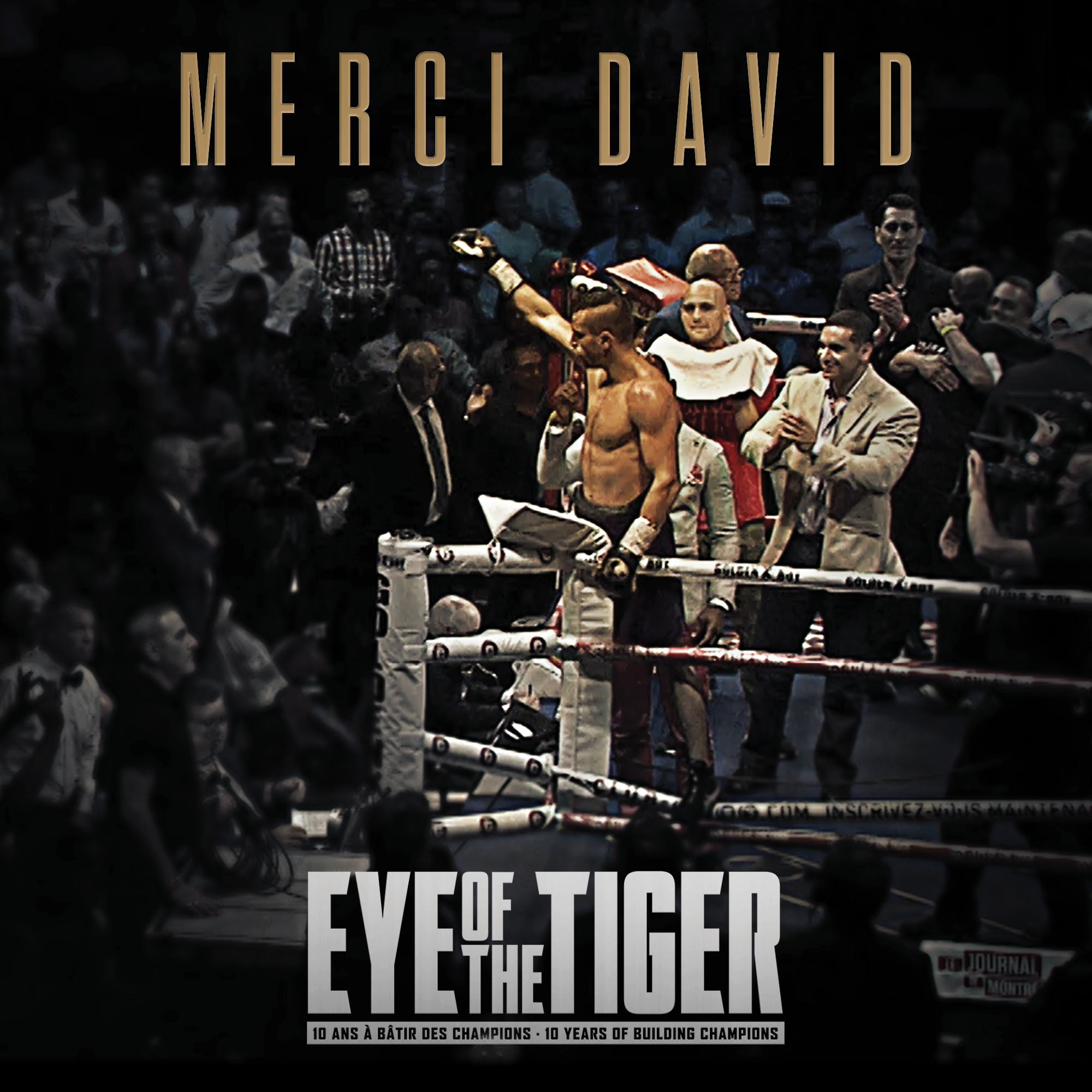 Posted at 11:19h in NEWS by virginie_admin

Light of heart and head held high, Laval boxer David Lemieux is retiring from competition. The ex-IBF middle-weight Champion of the World has not only made boxing history with his unforgettable performances, he has also been a foundation of the Eye of the Tiger story. EOTTM extends its heartfelt thanks to Lemieux and wishes to pay tribute to his hugely successful career.

Lemieux has treated boxing fans from the four corners of the Earth to intense and phenomenal fights. Above and beyond his stellar performances, his 43 victories in 48 fights, his 36 KOs and his 200 rounds, David is first and foremost a warrior whose courage and perseverance have made him a source of inspiration. Noteworthy among his most spectacular performances was his resounding victory against Gabriel Rosado in December 2014 in his first fight on the prestigious HBO network before a hostile crowd, a fight which gave him the NABF title belt. In his IBF world championship bout against Hassan N’Dam in June 2015, one of his most career-defining fights, Lemieux sent his opponent to the mat four times before a delirious crowd at Bell Centre. Just as noteworthy was his clash against the unified middleweight champion of the world Gennady Golovkin, his greatest career challenge, before a filled-to-capacity Madison Square Garden.

Known for his devastating striking power, Lemieux has punctuated his career with spectacular victories. Who hasn’t watched over and over the highlights of David’s fight against Gary O’Sullivan at the Las Vegas T-Mobile Arena, or his bout against Curtis Stevens that featured what Ring Magazine called the knock-out of 2017?

“I’ve accomplished a lot in the course of my career; I achieved my dream of becoming world champion, I’ve given the fans rousing fights by accepting every challenge that came my way. I devoted my life to training, to boxing, and now I want to cherish every minute with my family. I accomplished a lot, but I didn’t do it alone. I want to take this opportunity to thank all the fans who supported and encouraged me throughout my career. Thank you to the EOTTM team, especially Camille and Marc, two exceptional men”, states David Lemieux.

Eye of the Tiger and David Lemieux grew and evolved together. Together, they experienced highs and lows, moments of sadness and of greater joy; at times they would be crushed, but then, as a team, they would rise above and celebrate and continue to plow ahead. The team became a family and accomplished what many said they never could: they carved out a place for themselves among the elite in one of the most competitive divisions on the international scene, thanks to performances that thrilled the fans and brought crowds to their feet.

“David is the kind of guy that people love because he’s authentic and his heart is big as the province of Québec. He’s someone who’ll take a challenge head-on, something he’s done throughout his career. He has all my respect for what he’s accomplished and even more so today as he retires at the peak of health, instead of clinging to the past. He’s chosen to retire at the right moment and I want to thank him for everything”, said EOTTM president Camille Estephan.

Marc Ramsay, David’s trainer of many years, has watched him grow as a man and an athlete and described David’s evolution as one of the most admirable for a boxer of his calibre, first in the 160 lb. category and later in the 168 lb. category.

“With a lot of nostalgia but just as much pride, today I accept David’s decision to retire. I remember the 10-year-old kid who’d go train every day at Russ Anber’s old gym with resolve and determination. It is this tenacity that, a few years later, led him to the peak of success in the world of boxing. I can state beyond the shadow of a doubt that David is one of the boxers that I enjoyed training the most in my career. We worked so hard, but we had so much fun doing it. I’m so proud of our journey together, proud of the accomplishments, proud of the person he’s become, proud that he’s retiring healthy and unscathed, and above all, proud of the path he has chosen to follow with his family,” adds Ramsay.

David Lemieux will be available for interviews with members of the press on Monday, August 15 and Tuesday, August 16. Please contact Andréanne Lambert by email at andreanne@eottm.com to coordinate.